Apprenticeships, real-world challenges, and a personalized learning plan that develop a sense of self and role as a true change maker.

Tej Acton Academy is a learner-driven community where each child is on a hero’s journey of self-discovery.  The Learning Design is based on three essential pillars: Learning to Learn, Learning to Do, and Learning to Be.

Core skills include reading, writing and math, which are necessary skills to master for success throughout life.

Each morning learners set SMART goals and spend approximately two to three hours on improving their core skills. We use the latest adaptive technology and educational gaming programs (see technology below) in a purposeful & motivating way, allowing students to learn at their own pace. Group challenges throughout the week reinforce understanding of concepts and motivate learners. Portfolios, badges and online tools allow mastery to be individually and continuously tracked by Guides in real time.

Launches are the first five to fifteen minutes that a Guide will spend to kick-off a Socratic discussion or project, usually at the start of the day and in the afternoon.

It’s a powerful moment because it gives our community the opportunity to get inspired, equipped, and connected before embarking on the next challenge. At the end of a successful Launch, learners are ready to get something important done. Here, Guides act as game-makers, offering challenges and tools- but never to lecture or teach.

Elementary students have 30 minutes of D.E.A.R. — Drop Everything And Read — each day, where they find a cozy nook and enjoy a good book from our library.

The goal is for learners to first cultivate a love for reading by reading anything they enjoy, and over time build up to more challenging books. They also increase skills through practice on online tools during core skills time. Students are intrinsically motivated by curiosity and inspired by what their peers are reading and talking about.

The purpose of Writer’s Workshop is for learners to become powerful communicators with an understanding that clarity in thought and communication leads to opportunity.

Learners will dedicate 2-3 days per week for 1.5 hours on Writer’s Workshop projects where they will practice through journals, emails, videos, sales pitches and eventually convincing debates, speeches, stories, biographies, research articles, etc. We believe learners will become powerful communicators if they develop a love for writing, have world-class processes and examples to follow (including peer critique and revision), and share their work publicly for critique.

Quests are carefully developed and designed projects for students to learn traditional topics like science, social studies, and history.

Learners dedicate approximately 2.5 hours each afternoon to Quests, with each Quest spanning the length of one session (4-6 weeks). They culminate with student exhibitions presented to parents and the public. This provides opportunities to learn concepts through “doing,” and when strung together, answers larger questions, fuels student passions, and instills valuable real world skills and character traits.

We believe activities such as P.E., art, yoga, mindfulness, gardening, music, field trips and even cooking are essential aspects of a Hero’s Journey.

Learners spend time each day on wellness activities that build a greater sense of self, community, connectedness, and engagement. This consistent practice better equips them with mechanisms to help cope with real-world stresses they may encounter throughout life, in addition to skills that will make them more self-reliant. Studies have shown the physical, mental and spiritual benefits of such wellness activities for students, educators and parents.

Guides at Acton Academy use the Socratic method rather than lecturing as experts or asking leading questions.

A Socratic guide sets up scenarios and asks questions to stimulate critical thinking through debate and inquiry. We believe that asking the right questions is more important than regurgitating answers. In addition, each day is launched with a Socratic discussion, typically using a story, to highlight the focus of the day and build energy, bring up a community need, or just inspire and encourage students.

Foreign language learning is shown to develop the human brain in areas of short and long-term memory, especially when studied from a young age.

In addition to immersive, platform-based language learning, we are excited to offer Sanskrit. Taught in many of the top universities around the world, including at Harvard University, UC Berkeley, and Stanford University, Sanskrit is rich in vocabulary, grammar and precision, rich in literature, rich in thoughts and ideas, rich in meaning and in values.

We use the latest interactive technology to support hands-on learning needed for 21st-century skills.

Over the 10+ years of Acton Academy’s history, students learn at about 2.5 grade levels faster than their peers at traditional schools*. Students have the ability to graduate high school at the age of 16.

*Results based on the IOWA standardized test frequently used by states and private schools to test for admissions into gifted and talented or accelerated learning programs.

Each session is 4 – 7 weeks long and ends with a public exhibition to demonstrate that session’s mastery, followed by a break. This structure helps students practice achieving short and long-term goals, and gives families the freedom to travel throughout the year.

7 to 9 Weeks Of Summer Break

A Day In The Life

A day in the life of a student at Tej Acton Academy starts with a morning of core skills, followed by afternoons spent working on hands-on projects with time to read, write, reflect and connect with peers. Within each work block, students choose from a broad range of work options based on their personal goals, passions and commitments.

At Tej Acton Academy, located in San Jose, CA, we are excited to inspire and empower your child through our middle school leadership-based learning academy and classes.

Our program is designed to bring out the best in your child and empower them to take control of their educational career. Our classes are curated to meet the needs of your child and provide them with a memorable experience.

Our middle school leadership-based learning classes are ready to help your child find their “Tej” and illuminate the path in front of them so that they can succeed in their endeavors. We are excited to get to know you and your child so that you can enjoy a personalized educational experience.

If you are ready to learn more about our helpful services, classes, and our educational facility, connect with our friendly team today through our helpful application page. 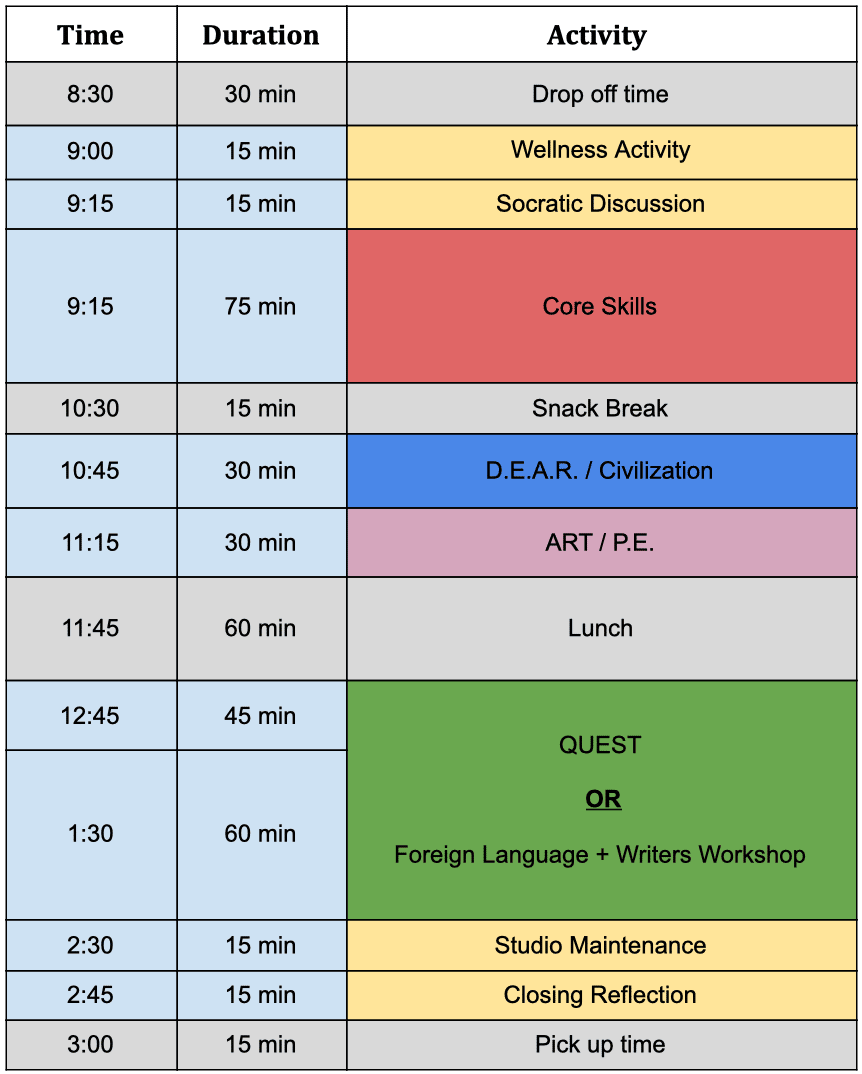 Learn About Our Admissions Process

Take the Next Step

Here are some helpful resources on Socratic discussions:

Acton Academy cofounder Laura Sandefer provides a “cheat sheet” for parents interested in having Socratic discussions at home. Sandefer writes, “The true purpose of a Socratic discussion is to come to new or deeper understandings of oneself, others and the world through an authentic wrestling with thoughts, information and ideas. And the real adventure is that you have no idea where you will end up.”

In this video, Acton Academy cofounder Jeff Sandefer leads a Socratic discussion about entrepreneurship with the elementary students in Austin. Sandefer and the students begin with a review of the Socratic rules of engagement.

We are proud to introduce our Learners to the Sanskrit language at Tej Acton Academy and all the benefits it can bring to developing their mind, clarity of thought, and communication skills.

“Sanskrit is the oldest and the most continually used language in the world certainly since the second millennium BC. Classical Sanskrit grammar, which was established by the great grammarian, Pāṇini, encompasses the largest literature of any language.”(1) Rutger Kortenhorst, a Sanskrit teacher in John Scottus School in Dublin, Ireland, shares with the parents of his students, “The Sanskrit grammar is reflected in part in Irish or Greek, Latin or English. By studying Sanskrit, other languages can thus be learnt more easily.”(4)

“Sanskrit is rich; rich in vocabulary, grammar and precision, rich in literature, rich in thoughts and ideas, rich in meaning and values.”(1) It is shown to develop the human brain in areas of short and long-term memory, especially when studied from a young age. In the published paper, “Brains of Verbal Memory Specialists Show Anatomical Differences in Language, Memory and Visual Systems”, neuroscientist Dr. James Hartzell and his team found in subjects using Sanskrit, massive gray matter density and cortical thickness increases in brains in language, memory and visual systems, including i) bilateral lateral temporal cortices and ii) the anterior cingulate cortex and the hippocampus, regions associated with long and short-term memory.”(2)

“Due to its vast creative possibilities, it is also capable of expressing precisely and minutely, abstract thoughts as well as the most profound and sublime ideas.” Take for example synonyms. “Synonyms of a word [in Sanskrit] are not just alternate names, where one can replace one by another. Each synonym grows out of and reveals a special quality or attribute of that object. One has to choose from the many possibilities to the one that conveys best the exact property in mind… For example, the word “fire” has 34 equivalents in Sanskrit… Each word has a different connotation.” (3)